“Our jobs are not about circumstances of birth. We are all here because of what we ourselves have done. You don’t become part of transplantation because your ancestors made some earth-shattering discovery. You are here because of your drive to achieve, your desire to help and your efforts to learn.” – Barbara Murphy, 2009 Presidential Address 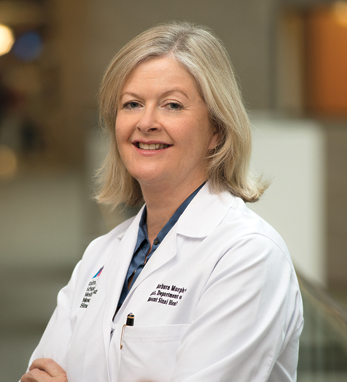 With great sadness, we announce the passing of previous AST President, Dr. Barbara T. Murphy, who passed away on Wednesday, June 30, 2021. She was 56 years of age. Barbara's commitment to transplantation inspired so many of us, and her passing has left a huge void in our community.

Dr. Murphy was awarded the Young Investigator Award in Basic Science by the American Society of Transplantation in 2003 and just six years later served as President of the Society in 2008-9. During her term as President, she played a pivotal role in the AST’s advocacy efforts, pushing for the passage of the Comprehensive Immunosuppressive Drug Coverage for Kidney Transplant Patients Act. She met with HHS Secretary Kathleen Sebelius and arranged the first Board of Directors meeting in DC - paving the way for regular fly-ins to advocate for transplant issues. Barbara was passionate about work that directly impacted patient access to healthcare and long-term coverage for immunosuppression.

She was committed to raising awareness about the importance of transplant research funding, organ donation, and transplant health. To raise public awareness, she worked on a partnership with the Jamie Redford Foundation (JRI) to hold the “Share the Beat” event. This event was a concert in Boston at Symphony Hall, featuring John Williams and Boston Pops, Phil Vassar, and hosted by James Denton.

Donor families and recipients shared their stories at the event, and the funds raised supported transplant research and JRI’s education program to teach young people about transplantation. These efforts eventually led to the AST’s creation of the Power2Save initiative.

Barbara was a huge advocate for education and played a significant role in expanding the AST’s Fellows Symposium in Transplantation. She championed for the AST to provide additional funds and resources to this meeting, allowing for higher attendance and multi-disciplinary attendance at the program.

She also supported the AST Annual Scientific Exchange, a midyear meeting primarily to engage research. This meeting later evolved into the Cutting Edge of Transplantation (CEoT), held in Phoenix, AZ each year.

She held several leadership roles within the AST, including the Board of Directors, Public Policy Committee, Education Committee, AJT Management Committee, Grants Committee, and the ATC Planning Committee.

As a leader in transplantation, Barbara played a significant role in several academic areas. She was the principal investigator of the Genomics of Chronic Renal Allograft Rejection (GoCar) study, which used gene expression microarray panel to identify which transplant recipients are at greater risk of developing fibrosis in their allografts. This study has helped clinicians prevent the loss of their patients' kidneys and led to the launch of the biotechnology company Verici Dx. Furthermore, she was a co-investigator on the study investigating outcomes in HIV-positive patients that receive solid organ transplants.

Barbara was the Murray M. Rosenberg Professor of Medicine and department chair for the Mount Sinai Health System. She was also dean of Clinical Integration and Population Health for the New York system’s Icahn School of Medicine. She was highly regarded by her colleagues and patients and the recipient of countless achievement awards.

She was President-Elect at the American Society of Nephrology (ASN) and would have been the first person to serve as President for both societies.

Her brilliance and kindness touched so many of us – not only as a colleague but also as a mentor and friend. Our community will never forget her energy and enthusiasm, which was reflected in all she did for her patients.

Be sure to read this recently published New York Times article about Barbara Murphy.

Please share your memories of Barbara in the comments section below.

the passing of Dr. Barbara Murphy

This is a tragic loss for her family, for the Mt. Sinai community, of which she was such an important part, and for the transplant community all over the world. She was an iconic leader in the field and a mentor to many. It was a privilege to know her. Deepest condolences to her family.

Such a sad and tragic loss at the prime of an outstanding career. Barbara was a delightful person, always engaging and soft spoken. She will be sorely missed by the transplant community in the US, Ireland and all over the world. A true leader in the fiels and an inspiration to so many. Sincere condolences to her family.

Dr Murphy was an inspiration to generations of Irish nephrologists. We have been so proud of her achievements as an Irish woman leading on the world stage. Her untimely passing has left us so saddened for her and her loved ones. Those of us who were lucky enough to meet her, and experience her kindness and warmth, will always cherish those interactions.
Ar dheis Dé go raibh a h-anam

Barbara's passing came too early for her family, friends, patients and the transplant community. She leaves a large gap for many of us and will be missed tremendously. Barbara influenced and developed many careers, uplifted the AST, and advanced our field to the benefit of our patients, while being compassionate, funny, humble and just a great colleague and friend. The ATC will not be the same for many of us!

Barbara was a colleague and a

Barbara was a colleague and a friend. We met when we were fellows at the Brigham almost 30 years ago and re-connected at Kidney Week.
Her death is tragic and a major loss to the transplant, nephrology and scientific communities. May her memory forever be a blessing to her family and friends.

A wonderful colleague and friend

Barbara was a visionary with international recognition as a scientist, collaborator, mentor and innovator. She was also a supportive friend, and devoted to her family. May her memory be a blessing.

A great loss for her family, her friends and our community

I will always remember Barbara Murphy for her determination, joy of family, love of research, unwavering support of so many careers, and for that amazing smile and laugh of hers. With all her accomplishments, she was always able to join in the silliness that happens when good friends get together. Barbara always gave thoughtful and honest advice, delivered in a way that only she could deliver it, sincere and never devastating. We have lost incredible friends in nephrology and transplant, but this loss hurts deeply. Despite all that she endured, she always found the positive. I think that if she could, she would smile, tell us to get over our sadness and to do great things in life.

Barbara will be remembered for her achievements and her humanity

Working in medicine awards you a lot of privileges. Collaborating with Barbara was certainly a privilege for me. Not only was she a great clinician researcher, she was honest, fair and forthright in any discussion we had about research. Our collaboration led to a great friendship and I appreciated her advice which was always well intentioned and straight to the point. She was very supportive and appreciative of her fellows and residents and was greatly admired by her patients. In all these aspects it was her humanity that shone through and it will be this quality by which she is most remembered.

A huge void
Gone too soon
Dr Barbara Murphy has been a huge inspiration for all of us in the field of transplantation, Her legacy shall live on.

As a female transplant professional, Dr. Barbara Murphy's stellar career achievements, mentorship, and kindness have been truly inspiring. Thank you, Dr. Murphy, for everything you provided to patients and to leagues of female transplant professionals who have been taking lessons from your leadership. My condolences to her family, friends, and everyone that worked hand in hand beside her.

A great loss for transplantation. An amazing colleague, a great researcher and a wonderful person. Barbara will be Missed and remembered by us all. Condolences to her family and loved ones, way too soon to loose her .

Absolutely shocked and saddened by the passing of Barbara, at her prime time in her career and way too soon. Still remember the moment when we were photographed together during ATC2008 in Toronto, her amazing grace and smile forever crystalized in my mind. My condolence to her family...

I knew Dr. Murphy only slightly, when we were in training in Boston, but this is a great loss to the renal community.
My thoughts are with her family & friends.
Yet her personality & achievements should inspire us in the years to come.